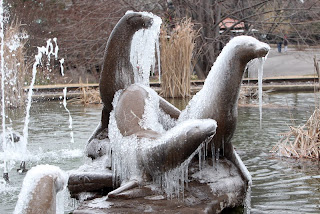 Frost giants release ice seals from their castles' frigid dungeons when they want to terrorize local fishermen. These beasts attack prey with their fins and snouts. Their skin is so brutally cold that their blows inflict frostbite. Anyone hit by an attack must make a saving throw or be slowed for d4+1 rounds. Heavy furs or other cold-resistant clothing grant a +2 bonus to this saving throw. Because ice seals can only digest frozen flesh, they will quickly devour anything they kill.

Fortunately, these creatures are extremely vulnerable to heat. On a failed saving throw, they take double damage against any mundane or magical fire as their icy flesh melts and boils.

Despite the obvious risks, many northern fishermen keep buckets of pitch or oil aboard their boats to ward off these creatures. Some frost giants use these seals to freeze bogs or rivers during warm season, allowing their slave warriors to cross them on foot.
Posted by J Blanchard at 5:32 AM 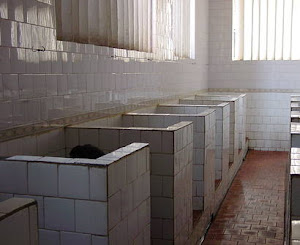